Arizona Gives Day was April 5 and concluded at noon on April 6! ABCS is participated again this year. AZ Gives Day is an annual statewide event that exists to raise awareness about the impact of local nonprofits and inspire generosity to make a difference in your community. ABCS has been serving Arizona families since 1960 and is proud to serve Arizonans across the state through our five regions. We have locations in Phoenix, Tucson, Yuma, Show Low, Prescott, Flagstaff and more.

You can help provide HOPE and CARE to hurting children and families in your community by giving a gift to ABCS. Your donation stays locally to serve people in your area or wherever we provide services nearby. When you give to ABCS or any of our seven Christ-centered ministries, your gift qualifies for the Foster Care Charitable Tax Credit. The deadline to give a gift and qualify for the tax credit on your 2021 taxes is April 15. To learn more about the tax credit, click here. Learn how your gift to ABCS can impact people like Matt…

Change does not often happen in an instant. Matt’s story of transformation has been years in the making. Matt learned about Arizona Baptist Children’s Services & Family Ministries (ABCS) through his parents Kay and Garry. His mother and father are incredible people of God and longtime volunteers with ABCS. They were initially introduced to our ministries through one of our community events in Tucson years ago. Kay began as a key regular volunteer at New Life Pregnancy Center soon after. She then moved over to the ABCS community resource center where she redesigned the clothing room, became the center’s prayer warrior and enlisted her husband, kids and grandkids to serve. We’re so thankful for volunteers like Kay who involve their whole family in ministry opportunities.

Over the years, Kay began to share more of her burden for her adopted son Matt. They adopted him as a baby, but in his teen years alcohol, drugs and destructive decisions wrecked Matt’s life. Kay and Garry walked through these challenges with him over the years – multiple rehabs, interventions and programs. Ultimately, Matt ended up in prison for over three years. It was there that he decided he wanted something different for his life. 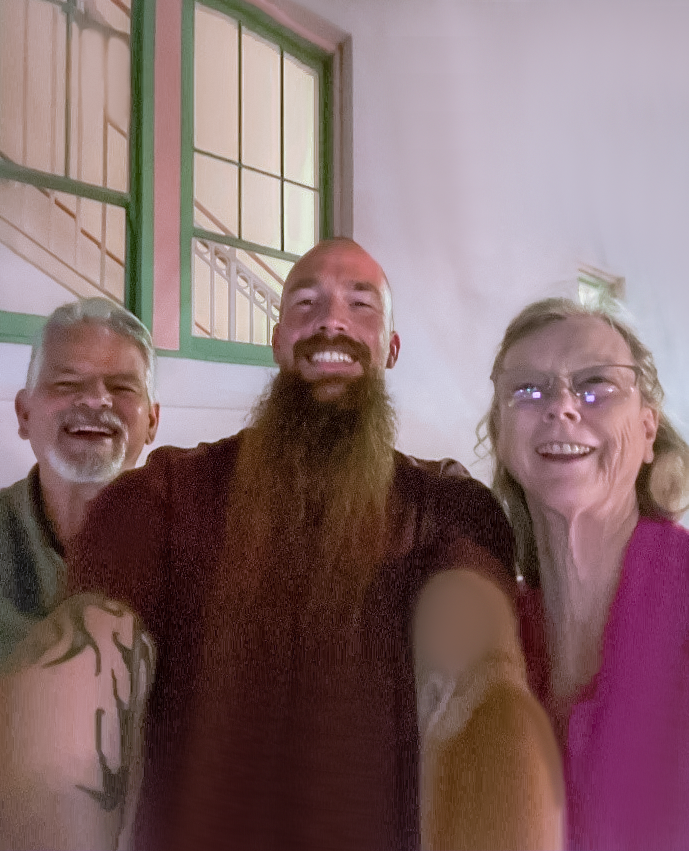 During this time, Kay and Garry became more involved at Caring Ministries, a part of ABCS’ Community Resource Centers ministry. They soon learned about Caring’s Life Development Program for men from two graduates of the program whom they serve alongside. They began sharing how Caring could be a place of grace for their son when he is released from prison. What started as a conversation became reality last fall. The team at Caring Ministries prepared a place for Matt to stay as he reentered society. Matt arrived off the train from the state he’d been incarcerated in and his faithful parents picked him up. They were overjoyed to be reunited!

Matt hit the ground running by working the dock, going out on grocery food rescue runs and even helping with maintenance at both Caring and ABCS. Most importantly, he is surrounded by other men and volunteers who love him and keep him accountable. Matt is growing through mentoring, counseling and weekly Bible study, and is being reminded of God’s unceasing love for him. This is an answer to Kay and Garry’s prayers for Matt. It is incredible to see the change that has taken place in his heart and his life! It is still early in the process so please join with us as we pray for Matt to continue to solidify his identity in Christ.

The children and families who come through our doors are normally in a hard season of life. This can look like a family struggling to afford basic necessities like food and hygiene items. Or new parents who need not only diapers and wipes but the support of a community in their new role as a mother or father. Sometimes it is a phone call from a senior adult who doesn’t have a way to get to our building but needs a listening ear and help with resources. Often those we serve have deep spiritual needs that they can’t see. Our goal is to show them the love of Jesus and help connect them to the source of that love. When you give a gift to ABCS you are serving the full spectrum of Arizona families, from unborn babies to senior adults. Your support provides practical help to meet physical, emotional and spiritual needs. It helps create lasting change in your community by providing for immediate needs while walking alongside individuals and families in every stage of life through ABCS’ seven Christ-centered ministries. Change happens by sharing the love of Christ while giving children and families the hope and care they need to move forward and grow.