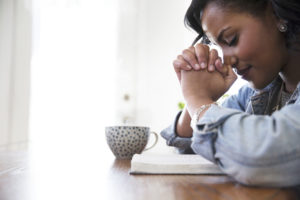 Sitting across from the offering box, he was observing how the crowd tossed money in for the collection. Many of the rich were making large contributions. One poor widow came up and put in two small coins- a measly two cents. Jesus called his disciples over and said “The truth is that this poor widow gave more to the collection than all the others put together. All the others gave what they’ll never miss; she gave extravagantly what she couldn’t afford- she gave it all. – Mark 12:41-44

Praying for me has mostly been a private time, a one-on-one conversation with the one that can save me. As a kid I knew very little about saying prayers other than what I saw in the movies or mirrored from friends. It was always a private whispered conversation, typically had before bed, a big event, or on a plane ride.

Then I began working here at Arizona Baptist Children’s Services. A few months before my interview my husband and I had decided to mirror his upbringing and not mine. We would follow Christ, attend church, teach our children to know and form a relationship with God. I went in for the interview so nervous, here I am having attended church merely 4 Sundays in a row prior to the interview, outside of major holidays, and I am applying to work for a ministry. I interviewed with Steve and felt the pull that I was meant to be here even more. After that interview, Steve prayed for me. It was the first time other than Grace before a meal, that it wasn’t whispered, or private. He spoke beautifully with such ease and, as he would say most importantly, with heart.

Now having worked here over a year I have had the opportunity to hear many of the staff pray. So often much like that first time with Steve, it sounds perfect, said with ease, and full of heart. My need to be perfect pushes me to not volunteer to lead or close in prayer in fear of not sounding perfect.

Last week, I again confessed this insecurity for Steve and he reminded me what the point is. He referenced Mark 12:41-44. The words you use in a prayer are like the coins: it is not the extravagance of the words but the heart behind the message that God hears.