ABCS Staff Devotion – “Some time later, Jesus went up to Jerusalem for one of the Jewish festivals. Now there is in Jerusalem near the Sheep Gate a pool, which in Aramaic is called Bethesda and which is surrounded by five covered colonnades. Here a great number of disabled people used to lie—the blind, the lame, the paralyzed. One who was there had been an invalid for thirty-eight years. When Jesus saw him lying there and learned that he had been in this condition for a long time, he asked him, “Do you want to get well?” “Sir,” the invalid replied, “I have no one to help me into the pool when the water is stirred. While I am trying to get in, someone else goes down ahead of me.” Then Jesus said to him, “Get up! Pick up your mat and walk.” At once the man was cured; he picked up his mat and walked.” 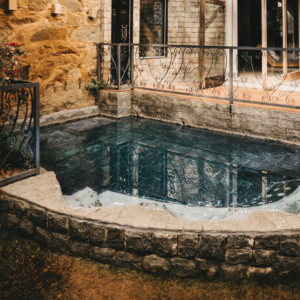 After 38 years, this man’s problem had become a way of life. No one had ever helped him. He didn’t have hope of being healed and his situation appeared to be hopeless. This story shows us that no matter how trapped we feel in our problems God can minister to our deepest needs. God has special work for us to do in spite of our issues or even because of them. Many have ministered effectively to other hurting people because they have achieved victory over their own hurts with God’s help.

This man was so crippled that he couldn’t go any farther on his own. He camped as near as he could to a place where there was hope for recovery. God met him there and brought him the rest of the way. For our clients, even though they might not have been voluntarily ready to seek help, they are now in a place with Arizona Baptist Children’s Services & Family Ministries (ABCS) where we can show them hope for healing. The man was as close to the hope of being healed as he could be in his crippled condition. Where our clients are now may be the closest they have ever come to the resources, life skills, support and people who care about them that they have ever been. I like to picture ABCS symbolically as the pool of Bethesda in that our clients are now close to the help that they need. We have the chance to reflect God’s love to our clients and to show them kindness.

Another thing that strikes me about this man’s healing was that oftentimes in the Bible, Jesus asked people to have faith and believe in Him and they would be healed. This man did not know who Jesus was. Maybe he sensed His power but we don’t know for sure. Jesus healed the man regardless of the man’s response. Sometimes we don’t have the perfect words to say but God is all-powerful and can heal whenever and however He chooses. Max Lucado, in one of his books, states:

“He will heal you  – instantly or gradually or ultimately. He may heal you instantly. One word was enough for Him to banish demons, heal epilepsy, and raise the dead. He only had to speak the word and healing happened. He may do this for you. Or He may heal you gradually. In the case of the blind man from Bethsaida, Jesus healed him in stages. He took him away from the crowd. He rubbed spit on the man’s eyes and asked the man what he saw. The man answered. Jesus rubbed them a second time. Jesus healed the man, but He did so gradually. Lazarus had been in the tomb for four days. But Jesus called him out. Did Jesus heal Lazarus? Yes, dramatically, but not immediately.”

If Jesus heals our clients, praise Him! If we are still waiting for their healing continue to pray for them and trust Him.