Jessie* is a teen whose family has a case with the Department of Child Safety. She has been in and out of the foster care system since she was a little girl. Jessie began to chat with her ABCS parent aide and told her story. She described herself as having “behavioral problems, always lashing out,” but also thought she was very smart for her age. During the drive to visit her father, he called her. Jessie told him that she was having a really bad day, and to never mind what he had promised but now couldn’t bring to the visit. “Forget about it. You always have excuses. I’m used to it,” she said and hung up with tears in her eyes. “It was hard to be the oldest and not have parents I can live with and trust,” Jessie shared. 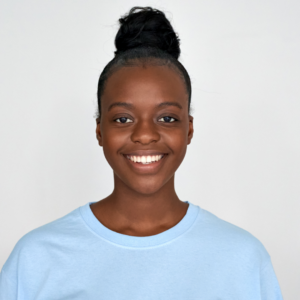 During the visit, Jessie rested her head on the kitchen table and told her father how stressful school, her friends and her foster home had been. She felt unheard. Her father gave her a hug and said he was doing what he could, but not to let it get to her. Later, he gave her his grandmother‘s rosary. Jessie put it on immediately with excitement and said she always wanted to learn how to pray. Her father wasn’t sure how to, but her parent aide explained what prayer is and that God hears all prayers. Jessie was happy she could have that connection with Him.

On the drive home, she began responding to some texts that seemed to upset her. She was using speech-to-text, and quietly replied to someone saying, “You don’t care about me anyway.” At that exact moment, the song, “Perfectly Loved,” came on the radio. Coincidentally, the musician wrote the song to her 14-year-old troubled self, declaring that she’s always been perfectly loved and cared for by God. Jessie’s parent aide said, “You shared some things with me earlier and asked how to pray. This song makes me think so much of you. Would mind listening to it?” “Sure,” she said. Her parent aide turned up the music. Jessie listened to the entire song and had tears in her eyes. She asked the parent aide why she wanted her to hear this song. “You’re having some difficult times right now and I want you to know that you are wholly and perfectly loved by Jesus,” her parent aide replied. “Each new day when you say your prayers and you hold onto your grandma’s rosary cross, He will hear you. All the stresses and worries that you expressed earlier, all of your self-doubts, He wants you to share those with him. He wants you to know that you’re not a problem, that you’re not a mistake and He is always with you.” She wiped her eyes and quietly said, “thank you.” We praise God for the opportunity to minister to foster children like Jessie and for His perfect timing. Join us in prayer for her and her family. *Name changed