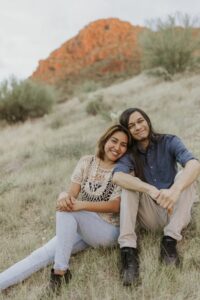 Dora, a local salon owner, reached out to the director of the New Life Transitional Program last December. She had heard about the transitional program through her business mentor and wanted to learn more about volunteering at the Fresh Start Expo. The expo is a gathering of organizations with missions centered around providing support and resources to individuals who were previously incarcerated. Dora has a passion to help people who are re-entering society after prison. When she first made the call, it was to learn how she could give back to the community. Little did she know then that God had more in store for her through the New Life Transitional Program. Dora is Native American and grew up in a religious Catholic home. During her childhood and into her young adult years she explored what her faith looked like for her personally, especially in relation to maintaining her Native culture and roots. Unfortunately, a struggle with an addiction to alcohol crept into Dora’s life. It took a serious accident to fully see the negative impact her addiction was having on her life and the lives of her children. Dora has three kids, two sons who are 20 and 21-years-old, and a daughter who is 17-years-old. One of her sons lives in California with her young granddaughter.

Six years ago, Dora and her family’s lives changed in an instant. While driving under the influence she crashed into a pole with both her daughter and her daughter’s friend in the car. As a result of the crash, her daughter suffered a head injury and Dora spent the night in jail. After she was released the next day, she discovered her car was totaled and worse yet, her children were taken into the custody of the Department of Child Safety (DCS). It was in this moment that Dora realized she needed help. She immediately enrolled into an intensive outpatient program and Alcoholics Anonymous. Dora completed all the requirements of family drug court and after 11 months she was reunified with her kids, only to be faced with another challenge. As a result of the car accident, she was sentenced to 15 months in prison. Dora shares, “After I got them back, I had to go away again. It took a really long time to clean up the wreckage of our past.” During her time in prison and recovery, she began to learn healthy ways to cope with life’s challenges. God was working in her life. She shares, “I have always read the Bible on and off throughout my chaos.” Even before she completed her sentence Dora knew that she would need to build a community of support to continue forward in her recovery. Dora encouraged others around her to do the same as well.

Once Dora was released, she hit the ground running to get connected with organizations that provide support for those re-entering society after prison. She also worked to establish a strong community of women in her life. Dora said, “It is very difficult to come back and live a ‘normal life.’” Another goal on her list as she worked to reestablish her new normal was finding a job. She shared, “I was terrified being a felon that nobody was going to hire me, but Sport Clips hired me and within two months I was in the assistant manager position.” Dora realized after starting the assistant manager role that rather than taking on more duties at work, she wanted to focus on reacclimating to society and fulfilling all the requirements of her probation. God used Dora’s time and experience at Sport Clips to prepare her for a new opportunity.

Dora began working at a local salon. In 2020, the owner decided to downsize to a suite and sell her salon. She approached Dora to see if she was interested in buying the salon from her. In October 2020, Dora made the faith-filled decision to become a small business owner. Buying a salon in uncertain times is a big step. When she reflected on the last two years she said, “God has sustained me. Every week is kind of scary learning business and learning about relationships.” Dora takes it one day at a time.

While Dora continued her success in recovery and built her business, she also walked alongside others in their recovery as well. She started sponsoring others and seeking out more ways to support people facing some of the same challenges Dora was able to overcome through God’s grace and provision. Dora’s passion to give back to the community had her in a place where she was pouring more out than what she was taking in. She needed more support. That was right when the Lord led her to the New Life Transitional Program. She enrolled in the program, gained a new mentor and began attending the weekly classes and Bible studies. Dora also utilized the free counseling services offered to participants. As she approaches a year of being in the program, Dora shared what she learned through her experience, “The pace that I am going is okay, that I don’t have to feel like I am playing catch up. That I have overcome a lot. It gives me hope… Everyone’s walk is different, we need each other.” A skill developed in participants as they go through the transitional program is setting goals and taking active steps toward achieving them. Dora has already accomplished so much, but she has big goals for her future. Some of them include buying a car, getting out of debt, purchasing a home and continuing to share the truth and love of Jesus Christ with members of the Indigenous community. She understands the hardships that the Native American population faces and she desires to share the healing and hope that comes from knowing the Lord.

A common thread in Dora’s story of recovery and healing is how she surrounds herself with support and a healthy community. The Bible tells us over and over again how important it is to live in community and bear one another’s burdens. The New Life Transitional Program is one of the seven ministries of Arizona Baptist Children’s Services & Family Ministries (ABCS). The goal of the program is to cultivate purpose, identity and life change through mentoring, counseling and life skills. Through the support of people like you, together we are able to provide holistic hope and care to hurting children and families through Christ-centered ministries. The heart of each of our ministries is to walk alongside people who are hurting to bring them hope that can only be found in Christ. Would you consider a year-end gift to the New Life Transitional Program or any of our seven ministries? Your gift will provide Christ-centered support to children and families in need! Learn more about how to give your gift
by visiting abcs.org/year-end.